Drones at the Super Bowl — A Breakdown

This is a special guest post from Oren Schauble. 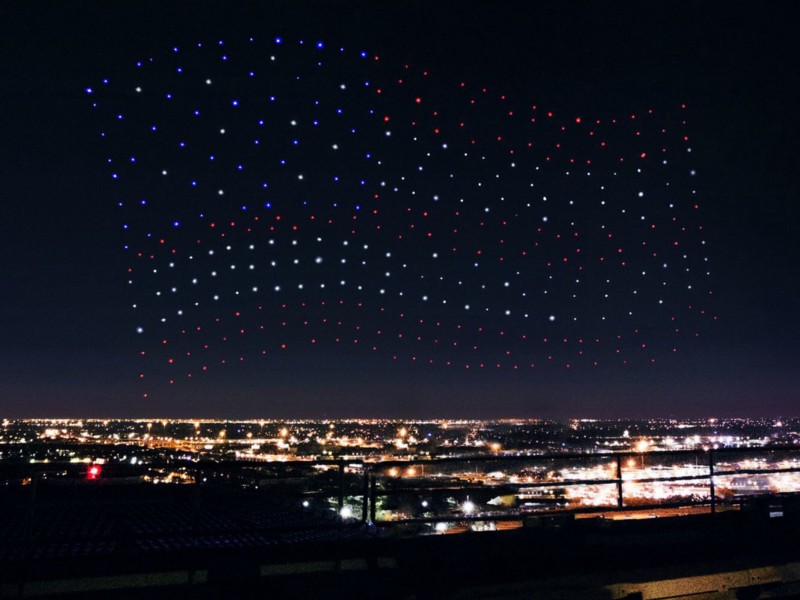 My friend Jack, a manager over at C3, called me right after the Super Bowl halftime* show “I figured you’re not watching, so wanted to tell you they used a ton of drones, and it was a big ‘Powered by Intel’ promotion. Thought you’d want to know.” Indeed.

This article is a primer on Intel, what they’re up to in the drone space, why the Super Bowl drone performance matters, and what this all means for the future of the drone industry. I hope its informative for you!

To start, if you haven’t seen the Intel drone swarming demo, stop what you’re doing now and check it out, it’s awesome.

Without getting too deep into control theory or the complexity of drone software stacks, I’ll just say, this is as hard as it looks.

The question, which we’ll get to at the end, is are these software breakthroughs attributable to the future of the drones and aerial data acquisition space, or merely a fantastic bit of marketing for a hungry processing giant? (spoiler: it’s both)

If you’ve wondered about Intel’s strategy in the drone space, or looked at the list of products, investments and acquisitions and come out with questions… You’re not alone, its an interesting mix of technology in various stages. Let’s break down the pieces.

What are Intel’s drone products? 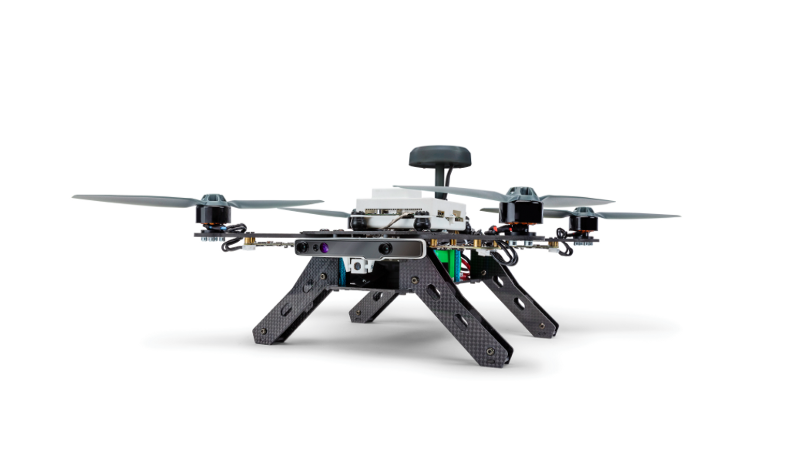 The Aero — As 3D Robotics exited the DIY space, there was a huge vacuum created for drone craft and parts that could be developed on, that still hasn’t been filled.

As a former 3DR team member, I can speak to the tremendous volume of autopilots and DIY kits that were shipped out, and to the power of the education program, ran by a team member of mine, PHD scientist Gregory Crutsigner (now with Parrot).

Intel’s developer platform, powered by PX4 (under Dronecode, part of the Linux Foundation) seemed to be a perfect fit to take advantage of the space, and own thought-space leadership for the development niche in drones.

Development platforms have a huge value in enabling the future use cases of drone technology.

The result of the Aero? No word since August, I’m still on the waiting list.

The Falcon8+ — An extremely redundant, and extremely expensive inspection drone, used by the Cyberhawks of the world in oil, gas and energy.

Redundancy is good, and every sensor, IMU, autopilot etc has backups in the Falcon 8+.

When engaging in inspections, especially with cell phone towers and anyplace with electromagnetic interference, redundancy is close to a necessity, especially for companies leveraging hardware purchased interally who need to meet legal and compliance requirements.

However, these inspections are being carried out with the (more advanced) technology currently available in your average DJI drone, at far lower prices, and the vast majority of commercial jobs don’t need the Falcon 8+, and never will.

I’d estimate there are around 1k of drones from Ascending (the company that produces the Falcon8+, owned by Intel) in the market, and that the majority of the jobs they do can currently, or soon will be, done by DJI off-the-shelf aircraft.

RealSense (inside Yuneec) — RealSense helped Yuneec take a rare win (many try, few succeed) against DJI, by putting sense-and-avoid technology in drones at CES ‘16, before anyone else could announce or release that technology.

The Typhoon H was a success, and the Intel and Yuneec collaboration earned some much deserved spotlight across the industry and the technology world as a whole. DJI’s response? Asserting their domination.

In less than a year they have equivalent technology, cheaper, across their entire line, and 5-way sense and avoid integrated in their most popular prosumer photography drones. It wasn’t even a bump in the road.

However, never underestimate the marketing power of being first… RealSense drone integration was a win across the board for Intel and Yuneec that will keep them relevant for some time in the consumer narrative. 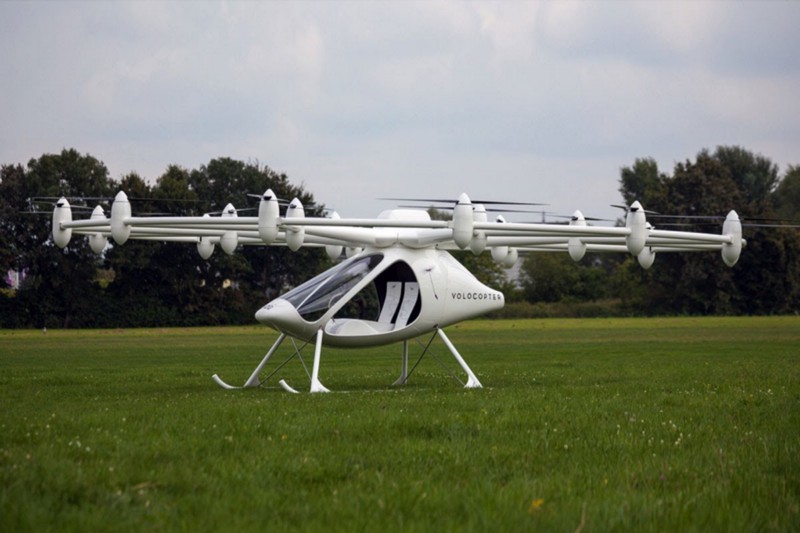 E-volo — A drone that carries people. A combination of terrifying and inspired marketing.

Airware — A whole lot of venture capital, and few inside or outside the drone industry that are exactly sure what they’re doing and how they’re doing it. Positive note: the acquisition of Redbird, a fantastic European software company focused on the aggregates space, where Kespry is trying to gain a foothold.

Yuneec — A powerhouse in the consumer drone hardware space, the only company putting up a fight against DJI.

Now that we’ve walked through what Intel is working on in the drone space, here’s a breakdown of the purpose behind what we saw Sunday.

First, let’s talk about Intel marketing. They’re responsible for one of the best branded content initiatives ever (in my opinion) targeted towards intellectual millennials and Gen X with The Creators Project.

They obviously care a lot about being synonymous with cutting-edge and culture, and in my opinion have done an excellent job compared to any processor or chip manufacturer, or really any similar tech giant, at focusing on a “brand” and achieving it through marketing dollars. A+ in my book.

Second, lets talk about the future of the drone stack. Everything is about automation.

“Each drone communicates wirelessly with a central computer to execute its dance routine, oblivious to what the hundreds of machines around it are doing.

The system can adapt on the, er, fly, too. Just before showtime, the computer checks the battery level and GPS signal strength of each drone, and assigns roles accordingly.

Should a drone falter during the show, a reserve unit takes over within seconds.” 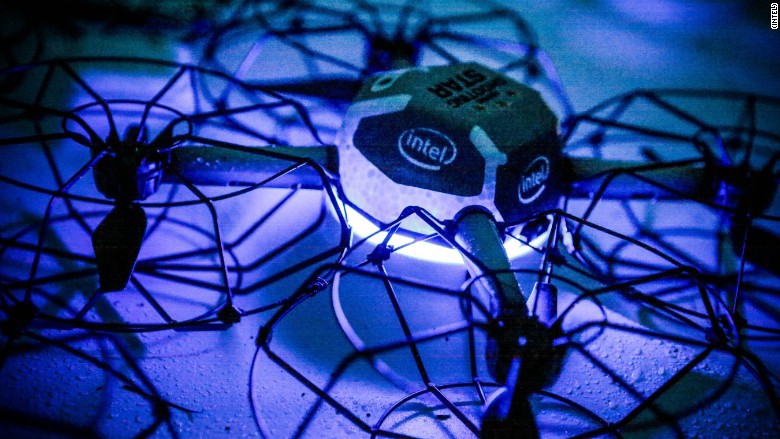 They’re achieving both marketing success and applicable systems infrastructure with the orchestration of these performances.

The Intel brand just became synonymous with drone innovation, even if people don’t know the application, and it reinforces previous announcements that have made their way to technology consumers.

They’re also learning how to turn external software (I believe the initial planning of the patterns of the super bowl flights was done in MAYA) into flight control, master synchronized control, and learn from a massive amount of data points, while building a scalable automation stack.

And let’s not forget the end game… The more autonomous data collection is happening, whether based on their stack, a stack they enable, or another altogether, the more processing that is needed to manage that data.

And Intel, at the end of the day, is in the business of enabling data processing.

Hope that was informative.

Want to dive a little deeper?

You may have read about Hangar acquiring Autoflight Logic in the news last year, and if you’re interested in the types of technology that enable drone experiences like this, I recommend exploring Airspace, an app made by our CTO and his team that enables drones to autonomously interact with “spaces” created by other drones and mobile devices.

If you own pretty much any DJI aircraft, you can do some interesting experimentation with personal drone autonomy.

Oren Schauble is an aerial photographer, drone enthusiast, and marketing executive. Check out his drone work here. This post was originally published on Oren’s Medium page.

← Drone Video of the Week: Icarus
How To Register Your Drone With The FAA →

2 Comments on “Drones at the Super Bowl — A Breakdown”